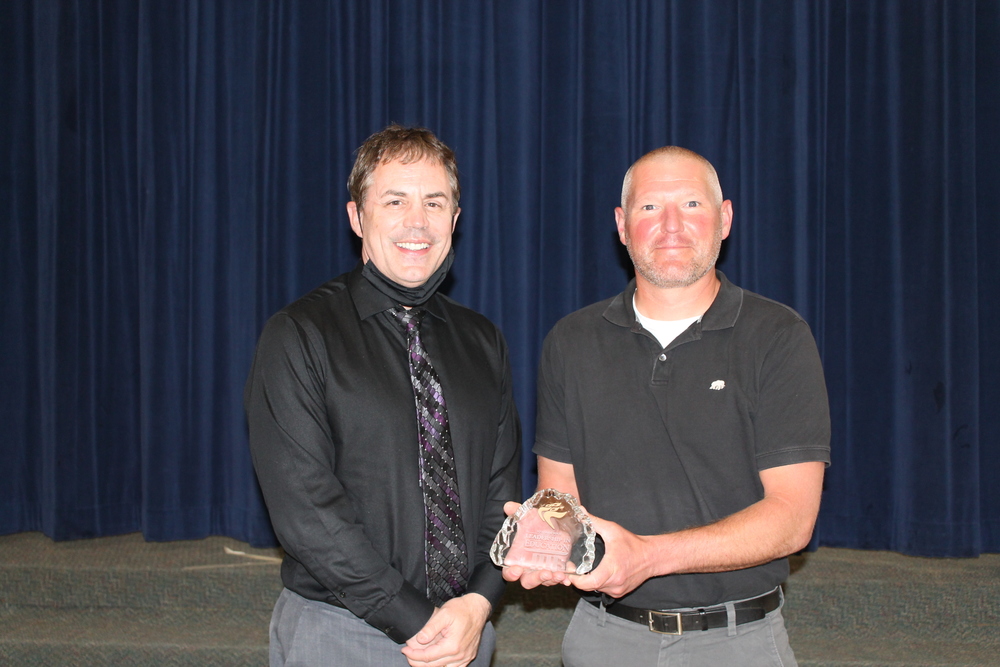 The award is sponsored by Mid-Columbia Bus Company and the IMESD. The purpose is to recognize a school administrator from a Mid-Columbia Bus Company school district who exemplifies the same qualities for which Doug Flatt was legendary. Flatt was the chief executive officer of Mid-Columbia Bus Company and died in a plane crash while on business. In guiding the growth and operation of MidCo, Flatt exemplified the finest qualities of leadership, attention to detail, service to his community, interpersonal relationships and customer service. Each year, only one administrator from all of IMESD’s districts in Umatilla, Morrow and Union counties receives the Doug Flatt award.

Dr. Mark Mulvihill, IMESD superintendent, presented the award, describing Wells as upbeat, competitive and positive. Mulvihill said that during Wells’ tenure at Union School District, he has led the district in significant growth in test scores, staff retention and graduation rates, but Wells’ signature achievement was the passage of an $8 million bond to update district facilities. “Carter Wells is a longtime educator who has positively impacted hundreds of staff and students over the years. I consider him a colleague and friend and admire the work he does on a daily basis,” Mulvihill said.

Chuck Moore, region vice president of Mid-Columbia Bus Company, could not attend the ceremony since numbers were limited due to COVID-19, but Moore said Mid-Co is proud to sponsor the Doug Flatt award and pleased that Wells is the recipient. Moore said, “We know Carter is a hardworking and dedicated superintendent who wears many hats in the district and the community of Union. As a longtime partner with the Union School District, we at Mid-Co have seen firsthand the caring commitment Carter puts forth to the students, parents and staff of the District.”